The Renewed Campaign to Memorialize

In 2018, the Mt. Zion Memorial Fund raised over $1,000 to memorialize Roosevelt Graves. The relocation of the executive director to Ohio and the lack of a reliable affiliate in south Mississippi, however, prevented us from completing this project at the time. The onset of the Covid19 pandemic served to further delay our work, but we now have a large group of supporters in the region.

This article contains newly discovered documents about his life and death.

Greenville musician Morris Burns is currently at the sharp end of our efforts to memorialize Roosevelt Graves. We plan to erect a memorial to him and his wife in Mississippi City Cemetery in Gulfport, MS, and we plan to organize an inclusive dedication ceremony with the help of the Ground Zero Blues Bar, which recently opened in Biloxi.

The event is tentatively scheduled for January 2023. 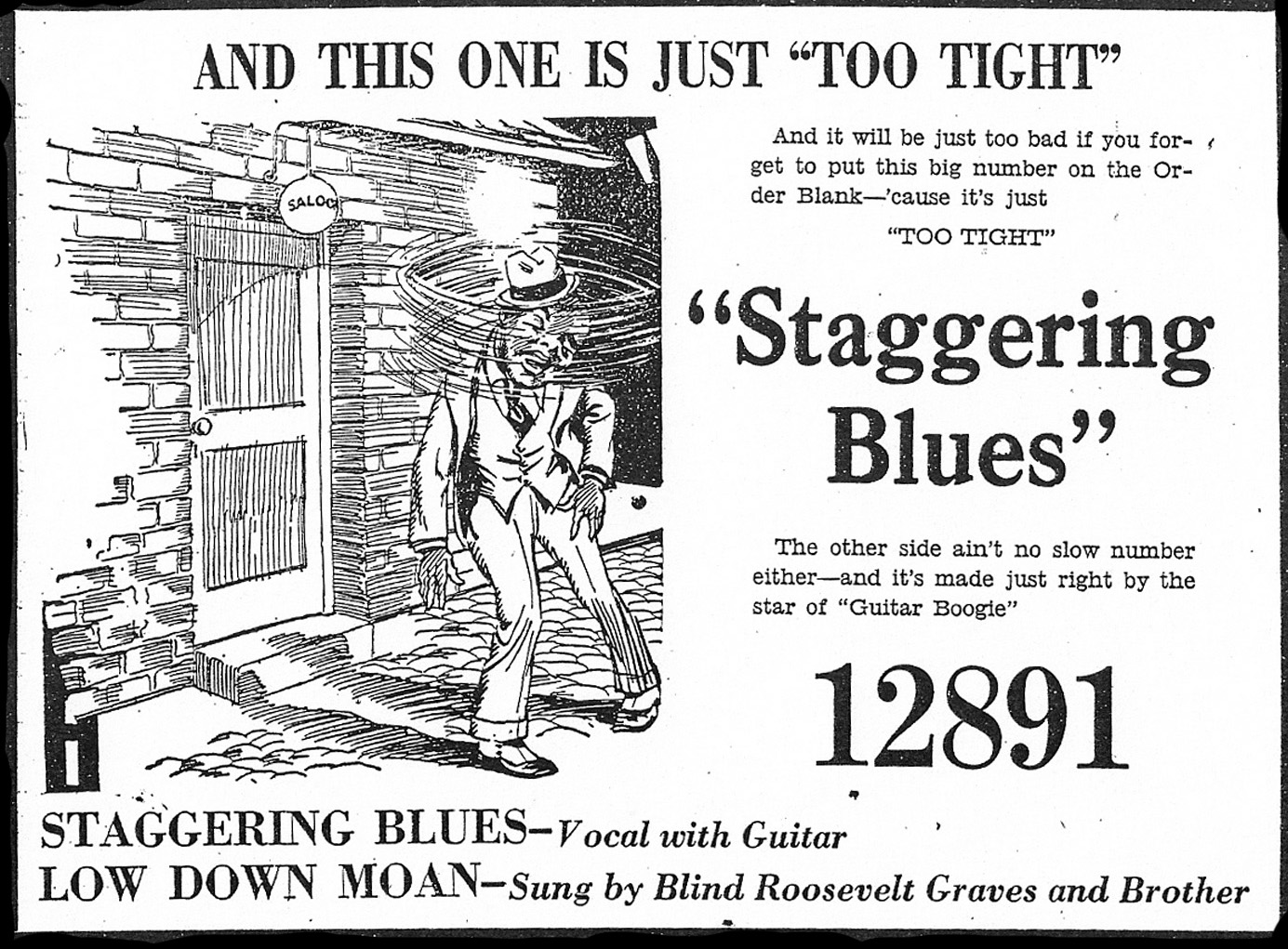 Lee Moise Roosevelt Graves was a recording artist and guitarist who mixed secular and sacred material during his career. He is credited with making some of the earliest rock and roll recordings in 1936 in Hattiesburg. Born in Jones County near Laurel, Mississippi, he and his brother Uaroy began playing juke joints in the early 1920s, and in 1929 they cut a number of ‘rocking and reeling’ spirituals for Paramount, all of which feature pianist Will Ezell.

The Graves brothers often performed on Front Street in Laurel, and the duo proved so popular that the audience at times blocked the road. Most of the time the brothers posted up in front of Lott’s Furniture Store, one of several similar stores in cities all across south Mississippi. The owner was Reuben Lott, a native of southwest Alabama who attended college at North Manchester, Indiana. He enjoyed the large crowds that gathered to hear the musicians, because larger numbers of people in front of the store often translated into large numbers of people who entered the store and bought furniture. The performances of the Graves brothers in front of Lott’s sometimes attracted the attention of the local police, who might either intervene and break up the crowd, or put some money in the tin cup and listen a while. By the end of the day, however, the brothers had usually filled the cup full of coins and dumped it out many times. 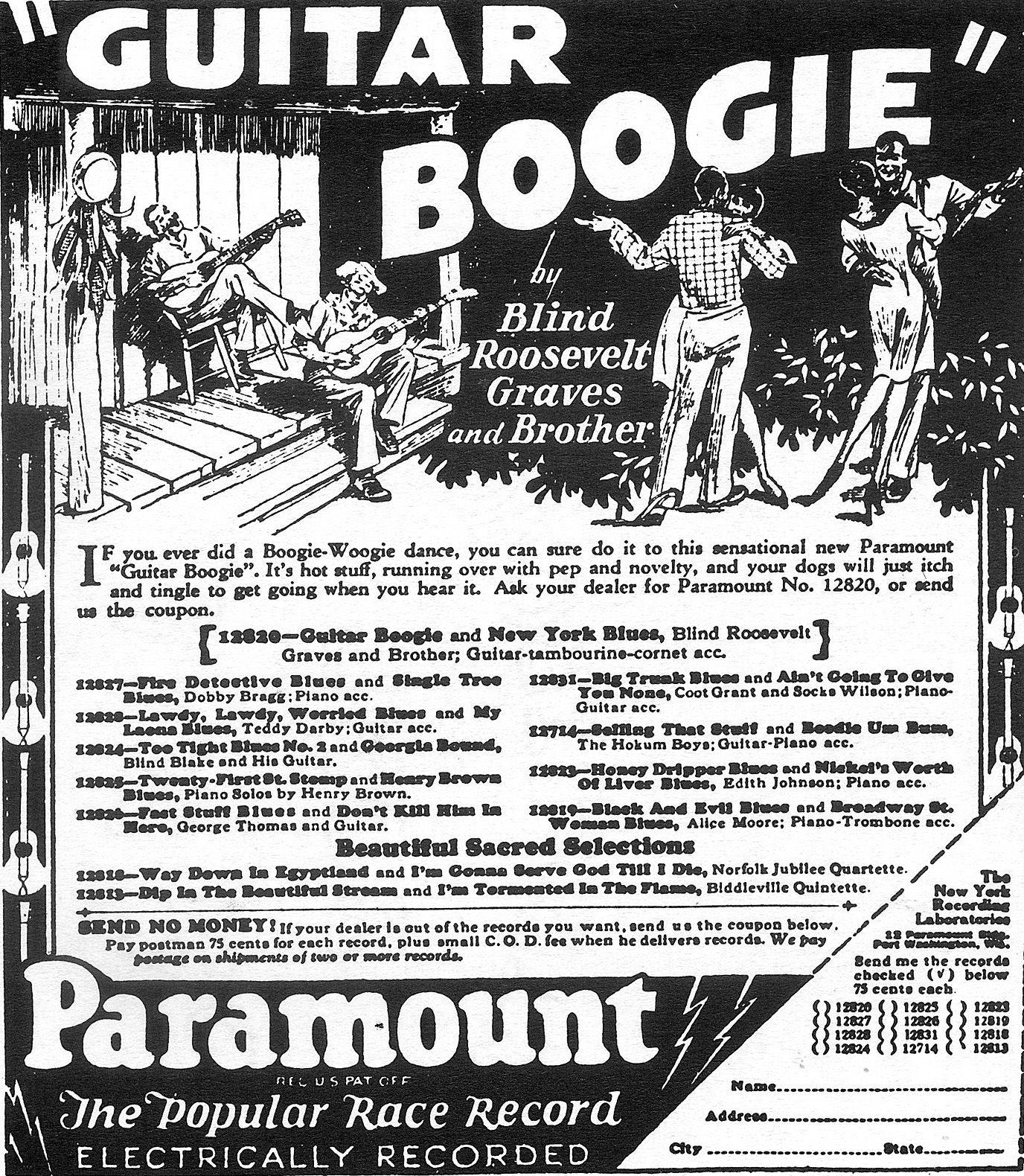 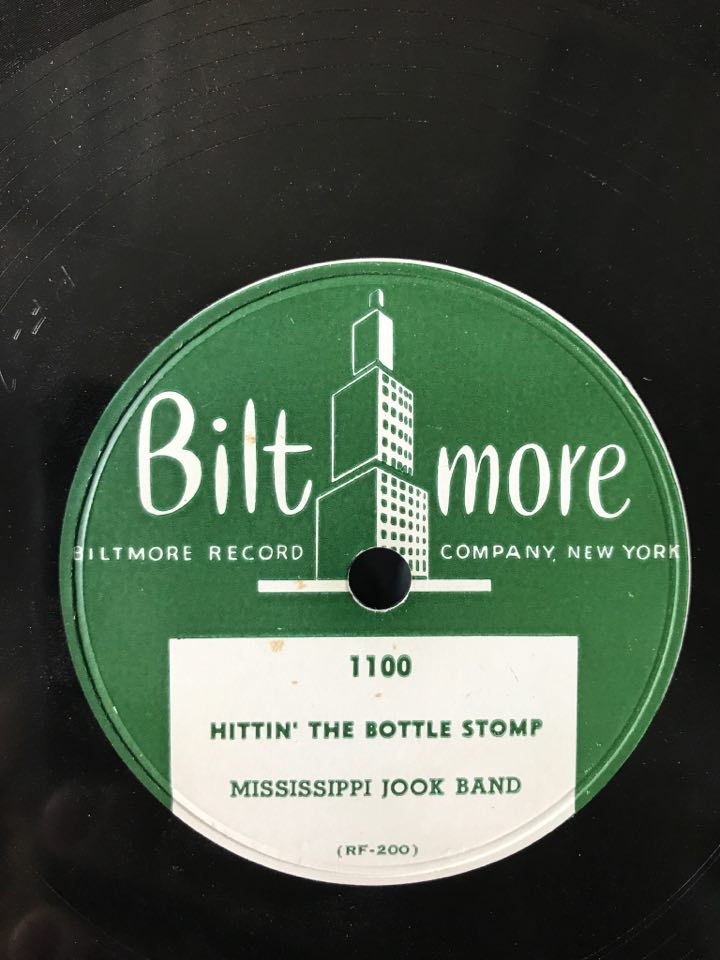 In 1936 Paramount Records talent scout and Jackson furniture store owner H C Speir, who had been responsible for their 1929 recordings, located the Graves Brothers performing in a church in McComb, Mississippi, and arranged for them to do a second recording session in Hattiesburg at the Hattiesburg Hotel. To play piano in the session, Speir chose Cooney Vaughn, an influential live performer in Hattiesburg. They called the new combo the MISSISSIPPI JOOK BAND. The combination of Vaughn’s uninhibited piano style with the religious feeling and musical versatility of the Graves Brothers resulted in what was described as the beginnings of a new type of music, rock and roll. With Roosevelt Graves singing vocals and playing guitar, brother Uaroy Graves on tambourine and kazoo, and Vaughn on piano they recorded a number of songs, amongst which were the notable, “Barbecue Bust” and “Dangerous Woman” both featuring fully formed rock and roll guitar riffs and a stomping rock and roll beat. The Mississippi Jook Band continued to perform for while during the late 1930’s but then broke up. Piano player Cooney Vaughn performed weekly on radio station WCOC in Meridian prior to World War II.

In 1937, Roosevelt Graves married a woman named Mary, who subsequently relocated her husband to West Memphis, Arkansas, specifically the small community of Hulbert near the Mighty Mississippi River. He stayed in the Memphis area for a couple of years, but he and his wife moved to 730 West Natchez Street in Jackson, MS in 1939. In 1941, however, he lived at 719 West Natchez Avenue with his brother (who is listed as Evan Graves—both are “musician”) but Mary lived way over at 711 South Jefferson Street. Alex van der Tuuk suggests that Graves may have performed with two horn players, a guitarist and a bassist in the early 1940s. 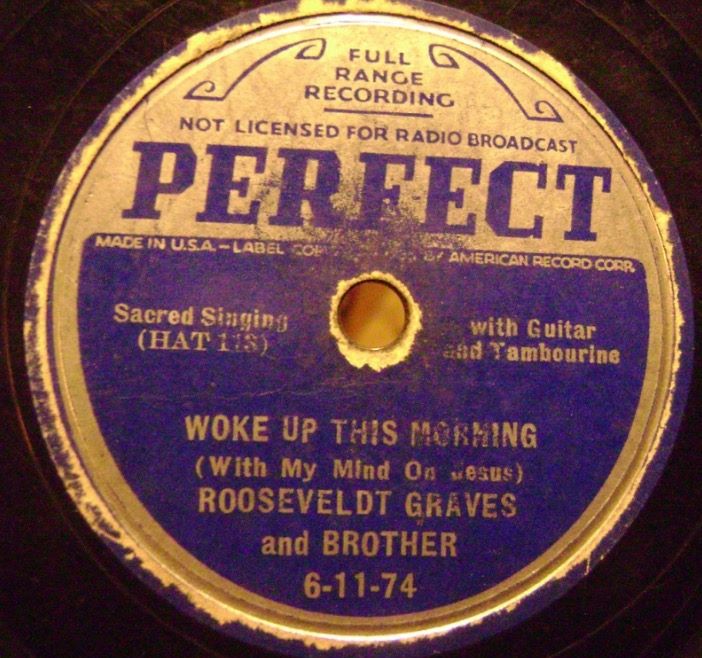 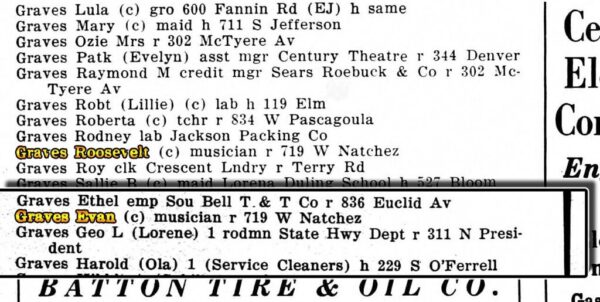 After the death of his wife Mary and brother Uaroy, Roosevelt Graves wound up in Hattiesburg, where he met a woman named Elizabeth Woods. She took him home to Gulfport, where they got married on December 9, 1960. In his last years, he joined the Baptist Church and sang in a male quartet. Someone even saw him perform in Chicago around 1962 at Maxwell Street Market. 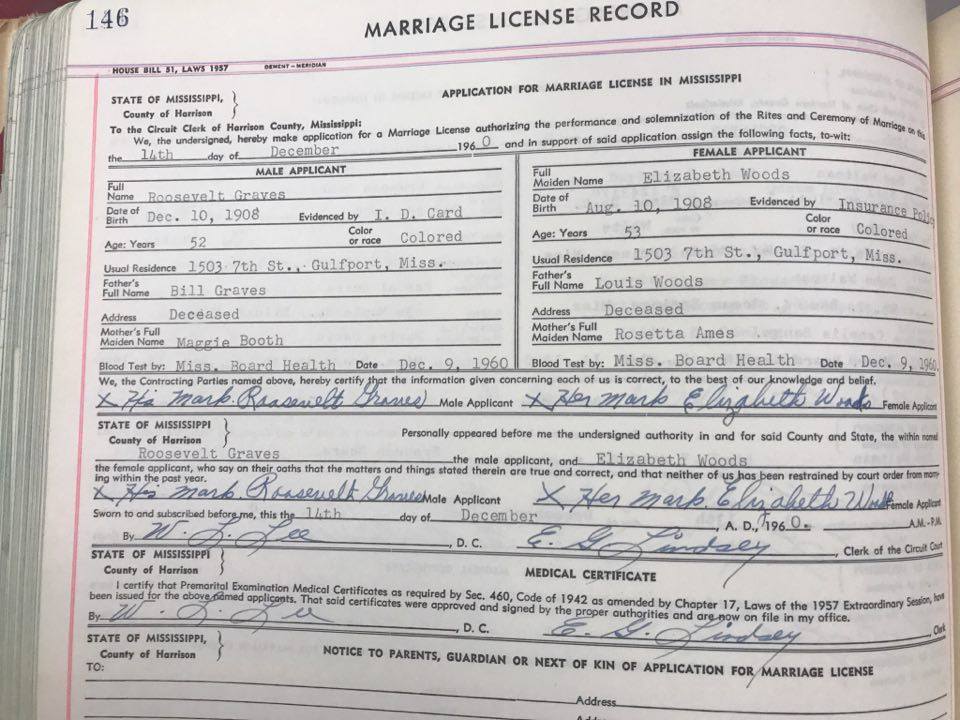 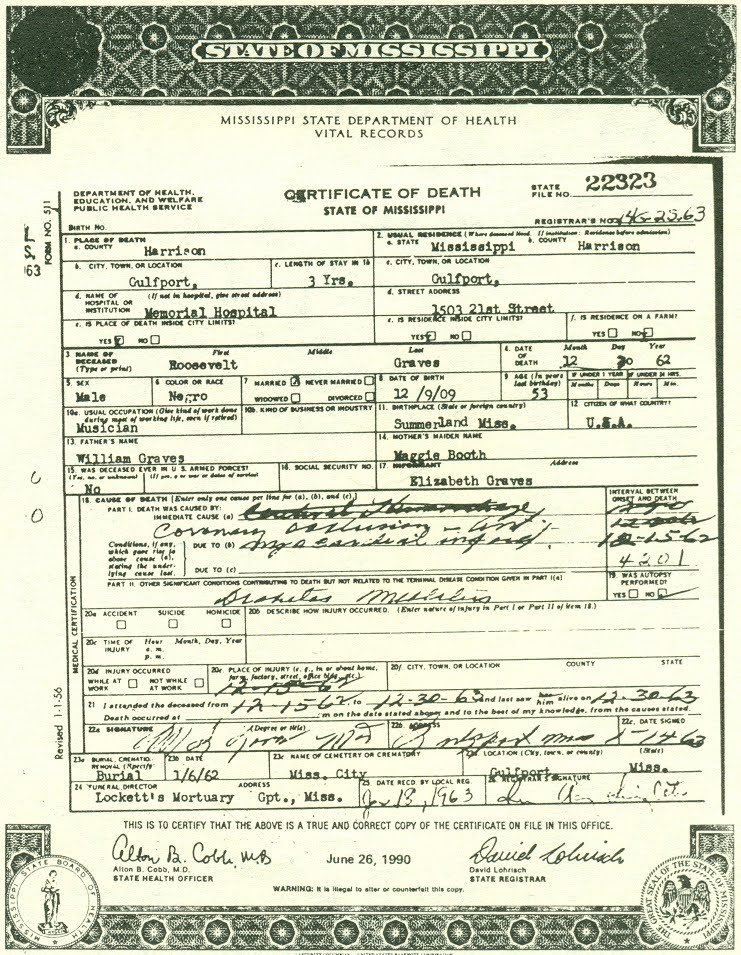 The Death Certificate of Roosevelt Graves

He lived in Gulfport on 1503 21st Street, however, on December 15, when he suffered a heart attack. A doctor attended to his needs for the next fifteen days until he died on December 30. The doctor noted that diabetes contributed to his death. On January 6, 1963, Lockett Mortuary of Gulfport buried his remains in Mississippi City Cemetery. 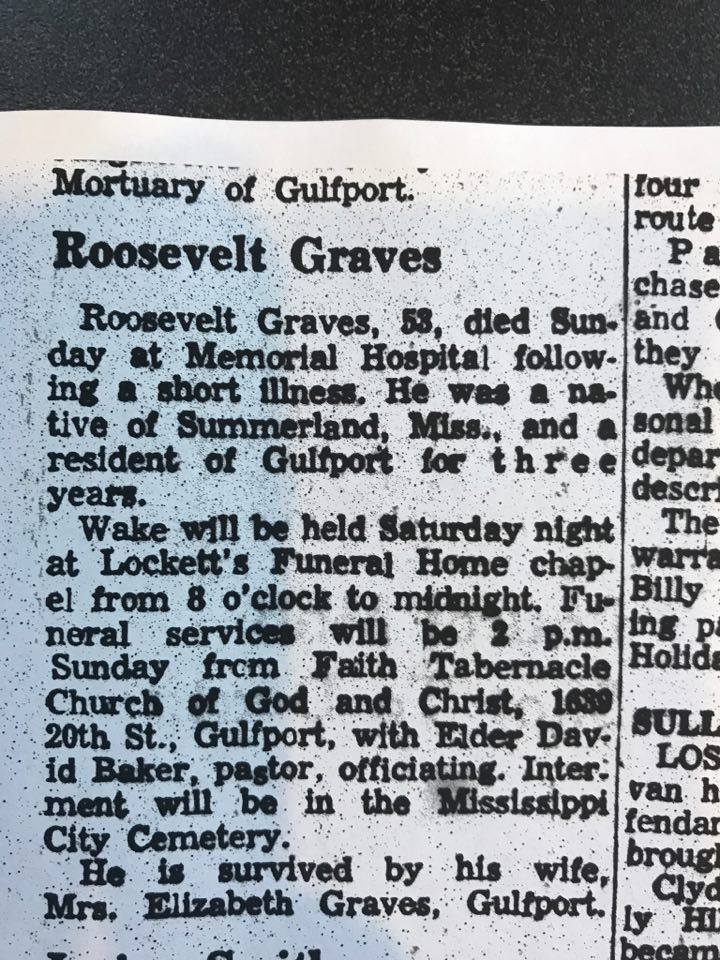 Hilbun also discovered the obituary of his wife, Elizabeth Woods, who died in 1970. 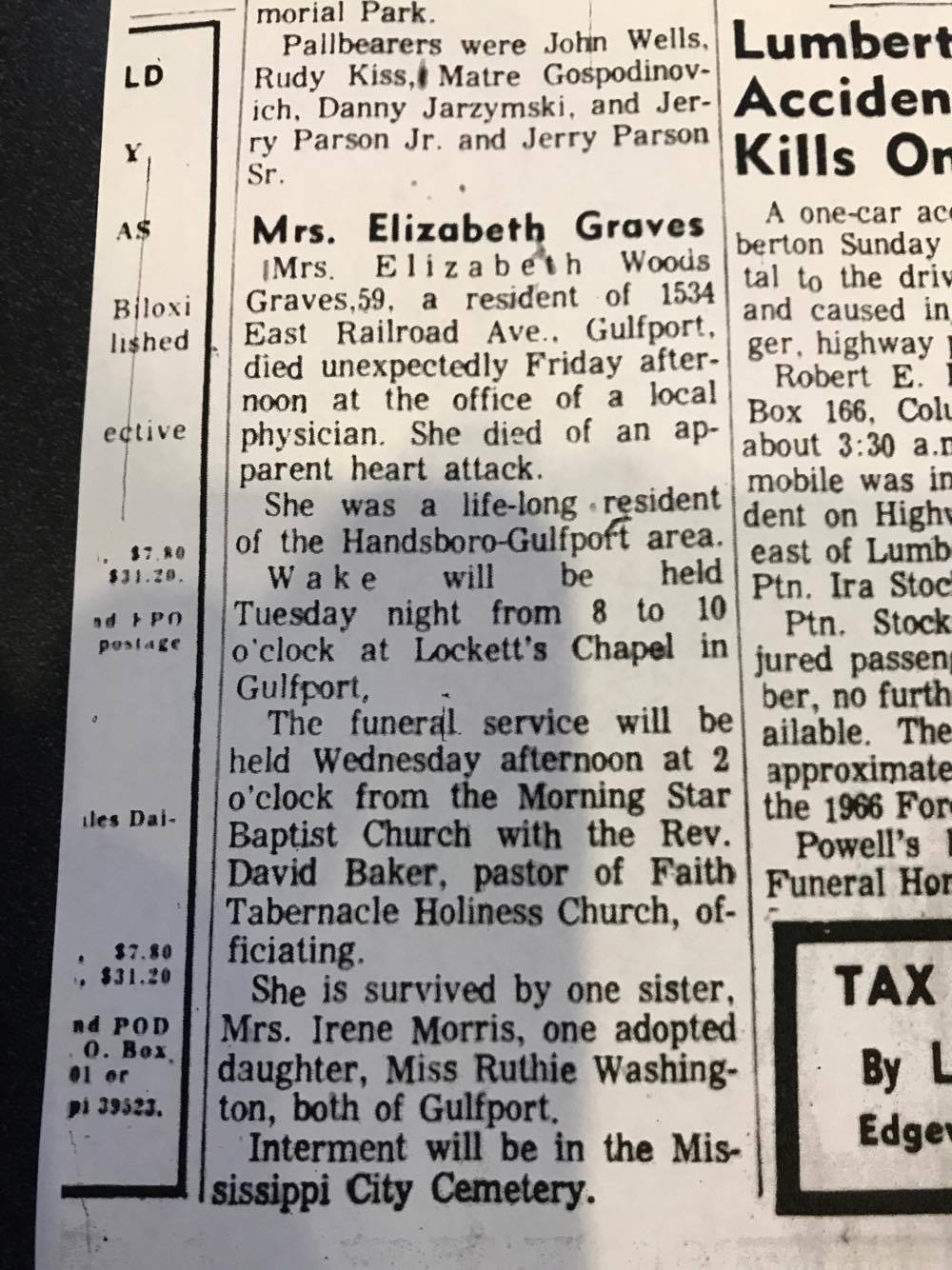 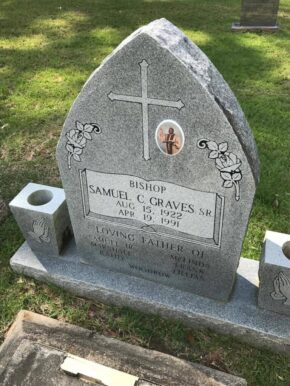 TELL US YOUR STORY

1164 John Street, Greenville, MS 38703
We have offices in Greenville, Columbus, and Water Valley, MS
206-817-9959
Reconciling the Blues King A Walk Amongst the Tombstones