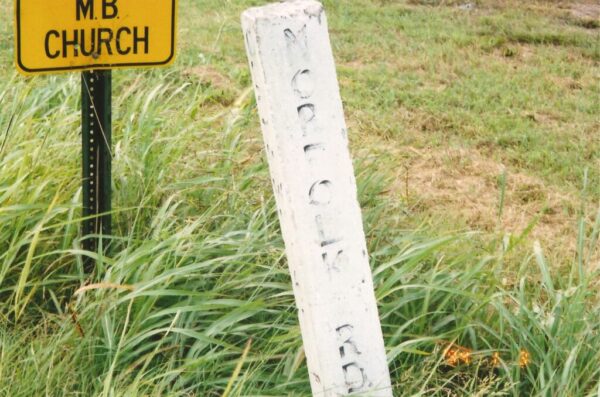 But finding New Hope Missionary Baptist Church outside the small Delta hamlet within shouting distance of Memphis is not hard. In 1997, we crossed the railroad tracks off Highway 61 on a meandering blacktop road where dusty soybeans were being cut and stopped for directions. Two men were working on a broken-down combine on that sunny October morning. Nothing was more urgent than getting a crop out of the field before rain set in.  Pointing down the road, one of the men says, “Just go on up to the next sign, and turn right.”

New Hope is difficult to miss. The sturdy brick building sits next to a tree-shaded cemetery and exudes solid dignity. Inside its paneled walls, an elevated pulpit reigns in the carpeted sanctuary; pews are softened by cushions. The formalities inside the church included the recognition of ministers, the reading of scripture; the official remarks of biographer Paul Garon, and the lip service given about a recognition being “past due.” The pastor welcomed a “congregation of great diversity assembled to honor a church member buried in the graveyard outside.” Her name was Lizzie “Kid” Douglas Lawlars.  To the world she is known as “Memphis Minnie.” 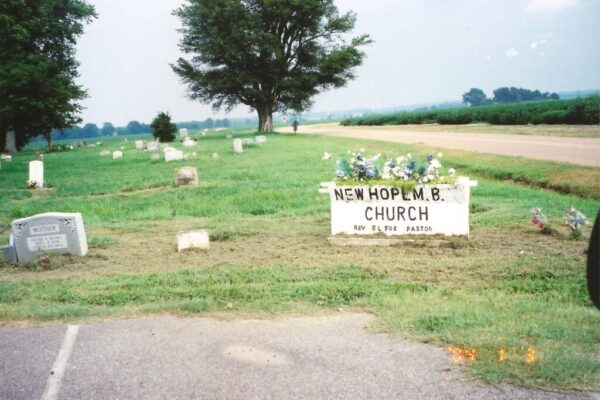 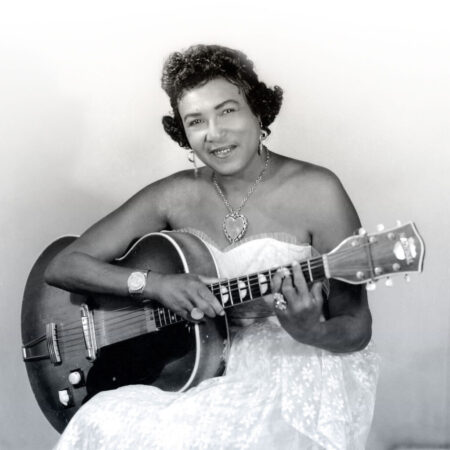 She died in 1973.  In 1997, twenty-three years later, MZMF Director Skip Henderson explained to the audience at the dedication how he founded the MZMF with the help of superstars John Fogerty and Bonnie Raitt, each of whom owed a debt to Mississippi’s blues masters. In their lifetime, few recording artists found much recognition; some got promises and paltry recording fees; many lie buried in isolated cemeteries in unmarked graves.

Delivering eulogies for blues musicians inside a church–where their barrel housing lifestyles were often admonished–presented a diplomatic stretch for preachers and kin. But inside New Hope MB Church in 1997, a spirit of understanding and appreciation prevailed.

Pastor Roger Brown softened an earlier remark about Minnie’s tribute being past due. “Perhaps it’s not late; but just the season. Let us honor one who gave to so many through music. Give honor to whom honor is due.” Giving visible testimony to Minnie’s contributions was the large congregation. After they passed the collection plate, the congregation respectfully adjourned outside for the monument unveiling. Deacon Herbert Brown exclaimed, “This is my roots; I am the son of a plantation sharecropper.” 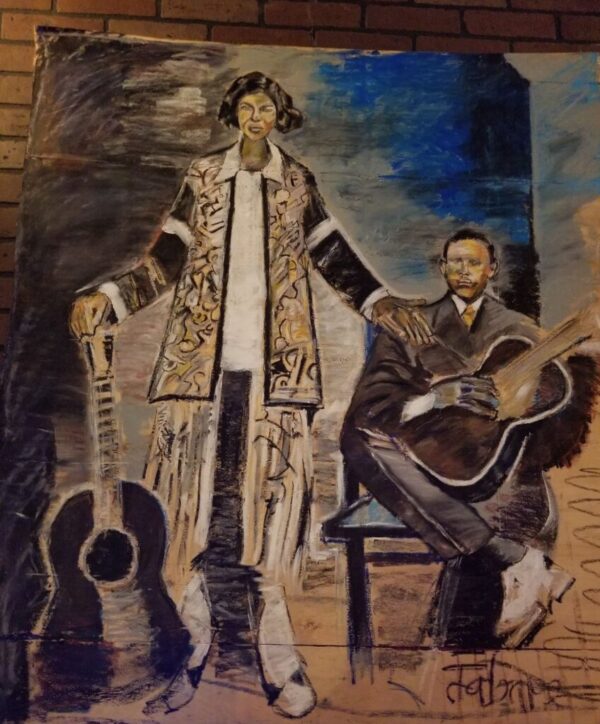 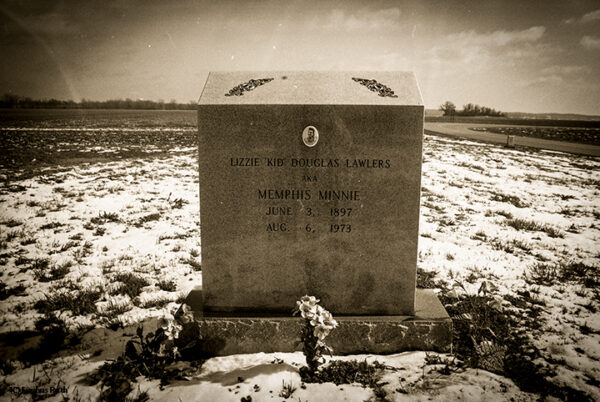 The Memphis Minnie marker and the New Hope Baptist Church lie between Highway 61 and the Mississippi River, and cotton fields surround the church and the adjacent cemetery. The front of the monument has a small picture of Minnie and her birth and death dates.

The headstone inscription composed by Minnie biographer Paul Garon reads: “The hundreds of sides Minnie recorded are the perfect material to teach us about the blues. For the blues are at once general, and particular, speaking for millions, but in a highly singular, individual voice. Listening to Minnie’s songs we hear her fantasies, her dreams, her desires, but we will hear them as if they were our own.” 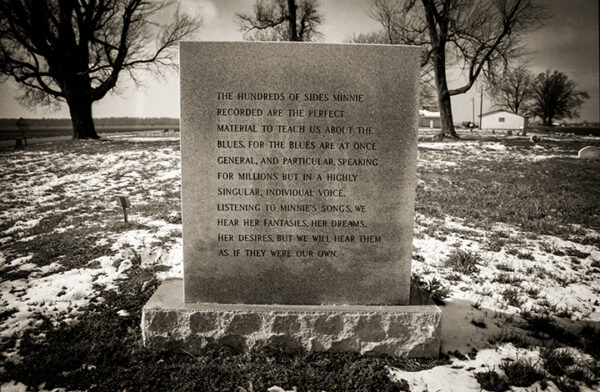 Posing for an official dedication photo following the unveiling are (from left) Memphis Minnie’s biographer Paul Garon holding a recording of the singer’s works which are being re-issued by B&G Records represented at the  ceremony by Vince Caro and family of New York; her sister and oldest living relative Daisy Douglas Johnson and her sister-in-law, Ethel B. Douglas. 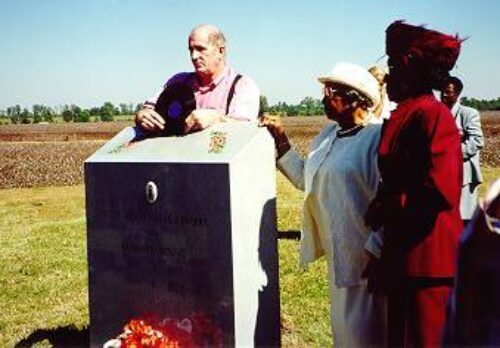 Blues-L member William Morgan reported, “This was a truly extraordinary event, and so much of the credit…should go to Skip Henderson of the Mt. Zion Memorial Fund, which has now been responsible for nine such monuments [and] goes much further than the placing of a headstone” in honor of Memphis Minnie, who died in 1973 and lay buried in an unmarked grave.”

All of the pink paper signs on every immobile object in the small hamlet of Walls, Mississippi, guided an estimated one hundred people to the “typically tiny” New Hope Baptist Church, which sits about a mile west of the gas station on Highway 61.  The crowd found the large, beveled stone at the eastern edge of the burial ground, draped with a bedsheet. As many as half of the people in attendance, Morgan believed, were relatives of Minnie, including the blues artists’ youngest sister, the last surviving of eleven siblings, and her daughter-in-law, with whom Minnie spent her final days.  The church minister was as cordial as could be and could not have had less concern for the ragged appearance of some folks and invited them over to the ceremony, which started promptly at noon.

Stories, testimonials, and remembrances marked the friendly event. With a take-charge air of authority, Sister Daisy Douglas Turner, Minnie’s niece, alluded to her aunt’s free spirit. “You didn’t ask me here to preach,” commented the principal surviving women in Minnie’s family. “Nobody knew what happened from the attic to the basement.” Minnie’s oldest sister-in-law, Ethel B. Douglas (married to Minnie’s brother), offered a testimonial, exclaiming that she “was on to Minnie’s ways,” and from her oldest living relative. Daisy Douglas Johnson was Minnie’s sister, the youngest of 13 Douglas children. 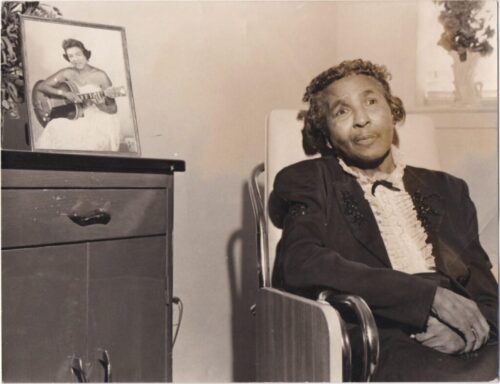 In addition to the clergy, family members, and friends, among those in attendance were Paul and Beth Garon, who in 1992 published “Woman With Guitar: Memphis Minnie’s Blues”; Jim and Selina O’Neal, of Rooster Blues Records and Living Blues Magazine; Panny Mayfield, of the Clarksdale Press Register; Gayle Dean Wardlow, blues historian; Art Tipaldi, of Blues Revue; a representative of BMG Records, who announced that a new Memphis Minnie collection [wa]s due out in January [1999]; a group from the BBC in London; Denise Tapp, a zeller [regular contributor on Blues-L] from Memphis, and Mark Hoffman, a friend from Seattle; a young couple from Massachusetts; a young couple from Norway; a small tour group so recently mentioned in a Southwest Airlines magazine article; and Mariah Warnock-Graham, who created the web site “Women of the Blues.” 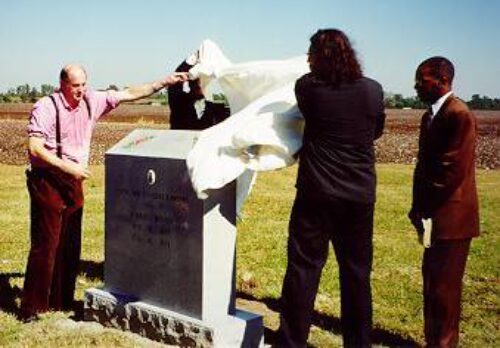 “All of us white folk were invited to stand and introduce ourselves and describe our interests in being there.  I could go on about what the event meant to me — about how the prodigal daughter had finally been welcomed home without further judgment; about how good and evil and black and white had converged and cared without incident; and how I came to love the people there for making it so.  But it’s enough to say that this event was one of those rare occasions in which all was right and fair, and the way it should be.”