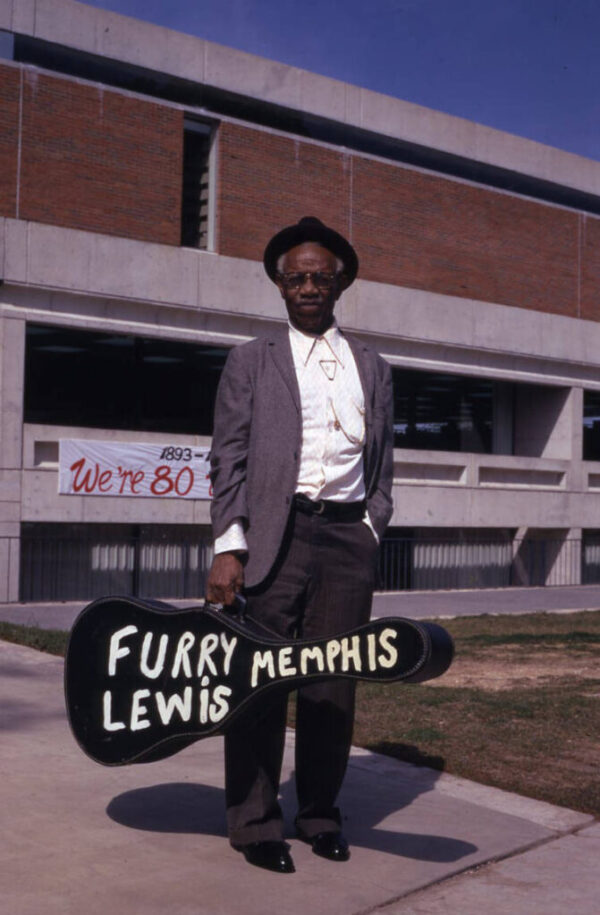 On August 14, 1981, Furry Lewis suffered severe burns in a fire at his duplex. He remained in the hospital, falling into a coma in September. After being in a coma for five days, he died of heart failure less than a week later at the City of Memphis Hospital, and he went to his grave in a brand-new suit and the tears of his mourners on his casket. “He would have loved it,” admitted Harry Godwin, a blues historian and good friend of the 88-year-old bottleneck guitarist. About 200 people crowded into the J.C. Oates & Son Funeral Home and passed the casket one-by-one, many in tears. Over the funeral home’s sound system, the gruff voice of Mr. Lewis sang his old songs — “Good Morning Blues,” “Take Your Time, Baby,” “Judge Boushe,” “Pearlee Blues” and “Brownsville Blues.” Sitting behind the casket for the service, two guitarists, a pianist and a harmonica player churned out “The Old Rugged Cross” and “When I Lay My Burden Down,” and sent the casket out to the hearse with “When the Saints Go Marching In.”

Those who knew him took turns speaking — of his legendary generosity, the music he passed on to them, and his hard times. “Furry would give you his right eye if he thought it would make you see better,” explained one woman. A young girl sprinkled rose petals on the casket. “It was tough, it was hard, and that’s what he sang about,” exclaimed one musician named Vic Conwill. “He sang the blues, and he had every right to sing the blues.” 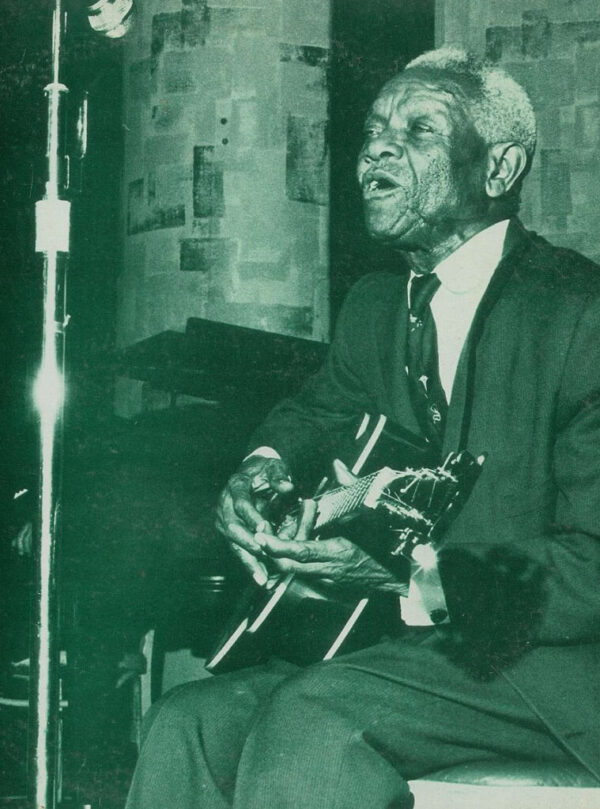 “You just live as long as you can and you die when you can’t help it.” 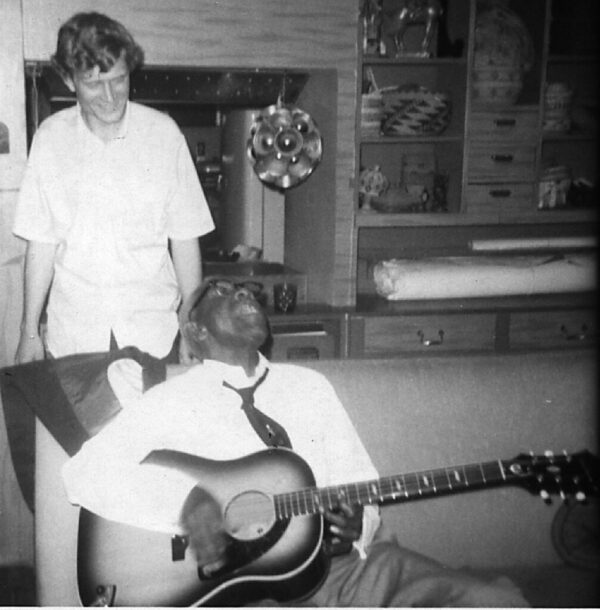 Reverend James Ramey, the associate pastor of Greater Middle Baptist Church, delivered a remarkable eulogy. Noting the 44 years Lewis spent working for the city as a street sweeper, Ramey announced that “from this sweeping of his city’s streets, Memphis received many ‘Cleanest City’ awards. Thank God for this legend who went about doing good under adverse circumstances,” exclaimed Ramey. “He exhibited to us that we can make it if we try.”

But he lived, and died, a poor man — in part because when he had money, he spent it on his friends. Arne Brogger, an agent, told of the time Lewis was on the road with the Memphis Blues Caravan, which included Bukka White and Sleepy John Estes, and the group stopped for lunch. “Well, the bill came and old Furry slapped down a $50 bill. ‘This one’s on me,’ he said, recounted Brogger. When he was asked why, Furry replied, ‘Well the way I figure it, maybe someone will buy me a lunch someday.'” 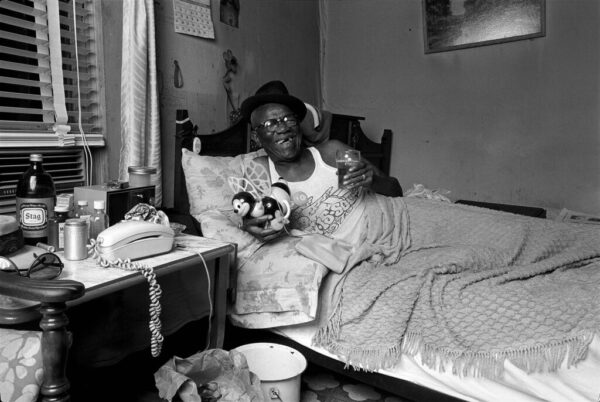 Mr. Lewis lived in a small house in one of the poorer parts of town, not far from downtown Memphis. Even though he made a number of albums and played a part in a Burt Reynolds movie, he, like most master bluesmen, never accumulated much money. Many people spun tales about this resulting from greedy and dishonest managers who gobbled much of the profits — but the truth is often obscured by the impetus to ignore racial segregation (resource hoarding), it’s pernicious effects that continue to linger into the late twentieth century, and the wages of whiteness. By disavowing white privilege, white Americans can view themselves as victims of initiatives to bring about racial equality, such as affirmative action. The same can be said about the “greedy and dishonest manager.” By placing the onus on one unknown and evil individual, white blues pilgrims blind themselves to the larger problems of white society and it’s long-term effects on the financial status of African Americans. 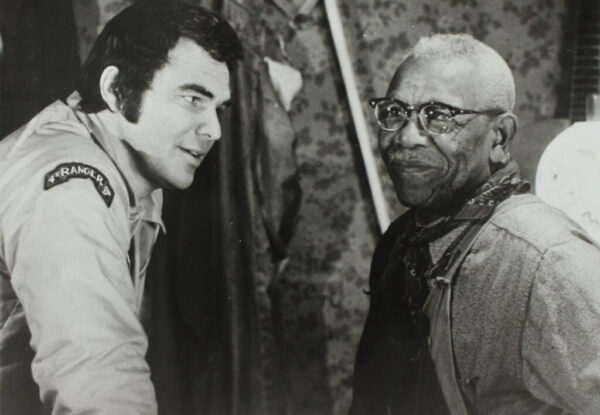 Born in Greenwood, Mississippi, Lewis was the last surviving member of W.C. Handy’s band. He played across the United States and Europe. He played himself in two movies, W.W. and the Dixie Dance Kings with Burt Reynolds and This Is Elvis, the semi-documentary on the rock ‘n’ roll legend. But he was well-known among Memphians and among aficionados of the blues as one of the founding fathers of the Beale Street sound. Furry started out, he used to say, with a cigar box and broom handle for a guitar. By the time he was in his 80s, which was when so many people knew him, he played an old six-string with frequent use of the bottleneck, which he developed to a high art. A so-called bottleneck is actually a steel cylinder which fits around a finger and is slid up and down the strings for a whining, haunting effect. When used poorly it has been said to resemble cats fighting. But folks rarely heard Furry use it poorly.

Furry Lewis was buried on September 16, 1981. Musician Sid Selvidge informed that the ceremony was not “real elaborate,” because “the family wanted to pay for it without a lot of outside help.” Selvidge joined Lee Baker and Lindsay Butler in singing some hymns, such as “Lay My Burden Down” and “Glory, Glory Hallelujah.” Alberta Cooper, the niece of Lewis, helped install the headstone of her uncle in the summer of 1983. The marker was paid for with donations collected in Memphis bars. Musician Sid Selvidge and Beale Street Caravan promoter Arne Brogger were two of the contributors who funded both the upright grave marker and the smaller footer in the summer of 1983. The marker remains atop his grave in Hollywood Cemetery. In 2016, the Mt. Zion Memorial Fund paid to straighten the listing memorial. 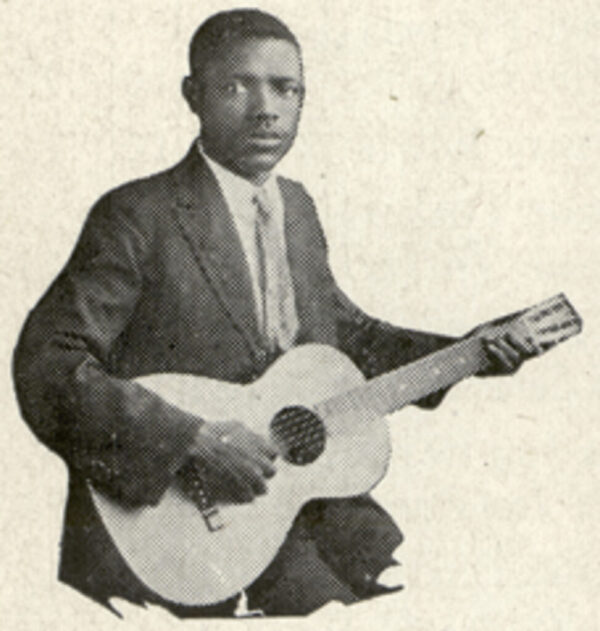 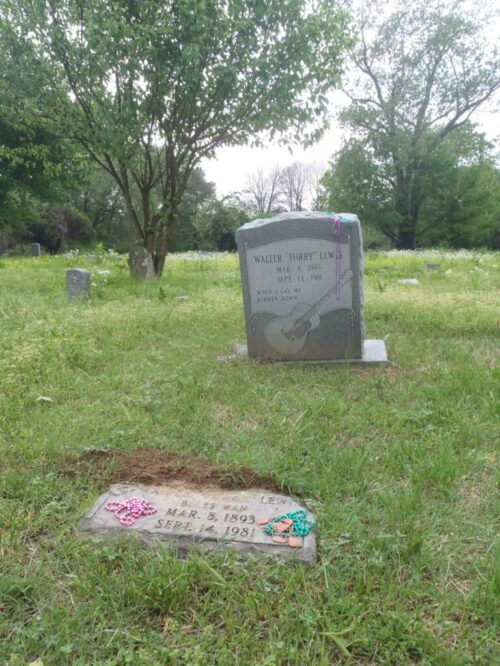 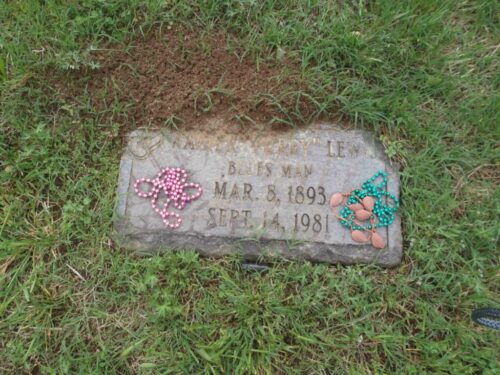 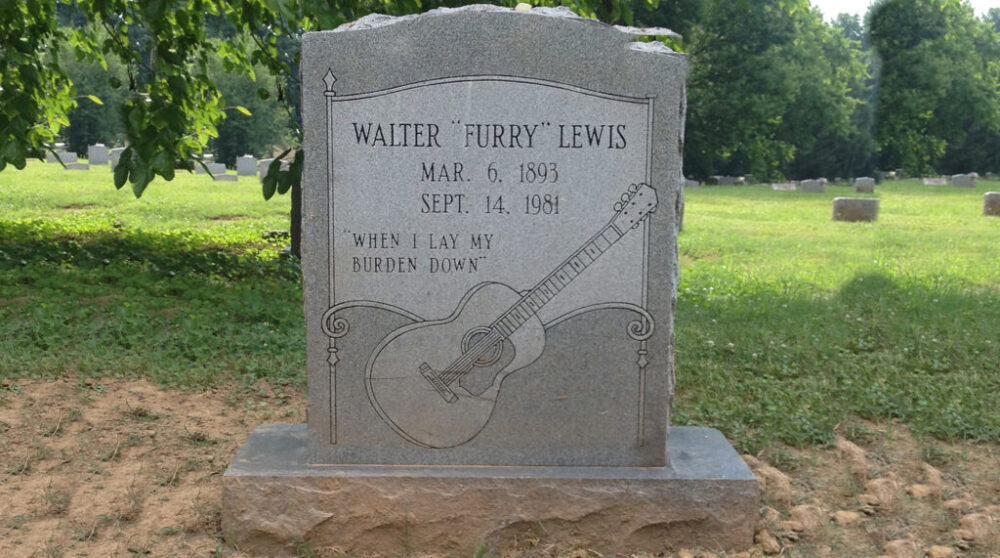